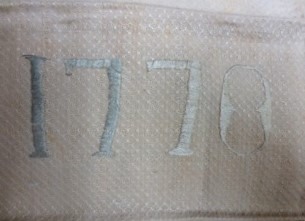 This linen piece came out of the archives of Tioga Point Museum (in Athens, PA) located at the confluence of the two main branches of the Susquehanna watershed, right before they join and head south to Chesapeake Bay.

We have been asking the historical museums in our region to help us define textile artifacts that are pre-industrial, that is, from before the US Civil War, textile that are NOT machine-made.
Examination of tax records, deeds and surveys show that, until the Industrial Revolution began producing cotton for the masses,
every household had their acre of flax and hemp to add to wool in their household menu of choices for spinning and weaving.

The linen piece comes with an authentication from Lyn and Maddie who manage the Tioga Point Museum’s textile archives:
"This piece's history states….'birds eye weave from flax raised by George West spun by Mrs. West and woven by Mrs. Karner of East Smithfield.’”

The remarkable thing about this piece of linen from 1770 is its historical context:
the piece predates by almost a decade General Sullivan’s expedition up the Susquehanna in 1779, which "destroyed more than 40 Iroquois villages and stores of winter crops, breaking the power of the six nations in New York all the way to the Great Lakes, as the terrified Indian families relocated to Canada.” (Wikipedia)

The story of Queen Esther Montour’s people, still very much alive in the Penn-York Valley, and Sullivan’s destruction of homes, crops and orchards just at harvest, their flight to Watkins and Montour Falls to gather up her sister Queen Catherine’s band, before paddling up the middle of Seneca Lake, and thus proceeding into Canada, as winter approached, elders, women and children, (many of the men died, buying time for the flight, at Newtown Battlefield), has the aura of mythology in this region...which obscures truth.

This lineage of matrilineal People, The Montours, three generations of prominent women on the watershed —women who were literate and educated—pinpoints the demise of the possible leadership of metis/mixed blood People, in this part of the world, Washington and Sullivan’s intent.

Letters and diaries of white women settlers add context to this time, a complex relationship whose history is still being analyzed.

[Personal note: Aren’t I a good girl? I say nothing about Sullivan’s Expedition being seen as a naked land grab, a view shared by many others. I can’t help myself, having steeped myself in this history/story for the past thirty some years. All right: hit “send" and off it goes.]